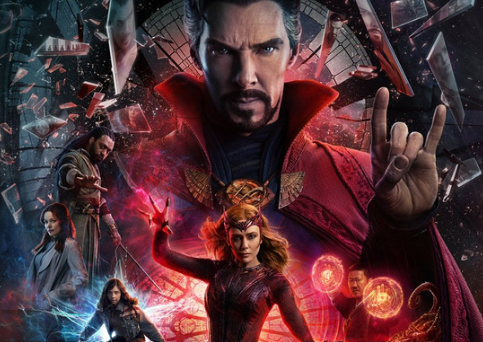 Doctor Strange In The Multiverse Of Madness is the culmination of the Multiverse saga for the Marvel Cinematic Universe, continuing stories directly setup in WandaVision, Loki and Spider-Man: No Way Home. So a grand box office for the film has always been the expectation from fans and box office experts alike. Tickets were finally put on sale for the film this wednesday and after just three hours of ticket Pre-sales being open for the film, box office analysts started to report that the film had already surpassed the previous biggest opening weekend for the year, WB’s The Batman’s 24 hour Ticket Pre-sales amount. Now, Box Office Pro has early forecasted the film for a $165 – 205 Million opening weekend with this number expected to rise as official numbers are released.

Fandango also reported their highest 24 hour ticket pre-sales for the year, beating The Batman in this aspect too. Along with this news, the film was also able to crash AMC servers even with the early 6 am PT ticket sales start. So it became very obvious that the film was heading for a big opening weekend and a massive Domestic and Global gross to follow. Box Office analyst meJat32 reported in a tweet that the film was easily the second biggest non-avengers pre-sale start and early predictions had the 24 hour pre sales number at $15 million+. This number is already double the amount The Batman made in it’s first 3 days of ticket pre-sales, which had a $134 Million opening weekend. It’s 24 hour pre-sales numbers are only comparable to that of Spider-Man: No Way Home which mad $35 Million in it’s ticket pre-sales, the number for the Doctor Strange sequel is still far away from this but this is just an early estimate and the actual number is expected to be significantly higher. Box office Pro has early forecasted the film for a $165-205 Million opening with early numbers, so this number is expected to rise over the next few weeks as we get more numbers.

The film has a lot of things going in it’s favor, trending daily along with Doctor Strange and Scarlet Witch. It is also a direct continuation of the events in Spider-Man: No Way Home which was the Box Office King of the last 2 years, making almost $1.9 Billion worldwide. Doctor Strange has also become a household name since his first film, playing a big role in Avengers: Infinity War and Endgame and Spider-Man: No Way Home which currently stand as the No.2, No.5 and No.6 highest box office grosses of all time. While, Wanda Maximoff of The Scarlet Witch has also become a fan-favorite character after she got her own hit series WandaVision. So the sky is the limit for the film, we should be getting some official numbers very soon which will give us a better indication of how big the film will open.

Stay tuned for all the latest updates for Doctor Strange in The Multiverse Of Madness and many more.

Also check out our review for Marvel Studios’ Moon Knight.