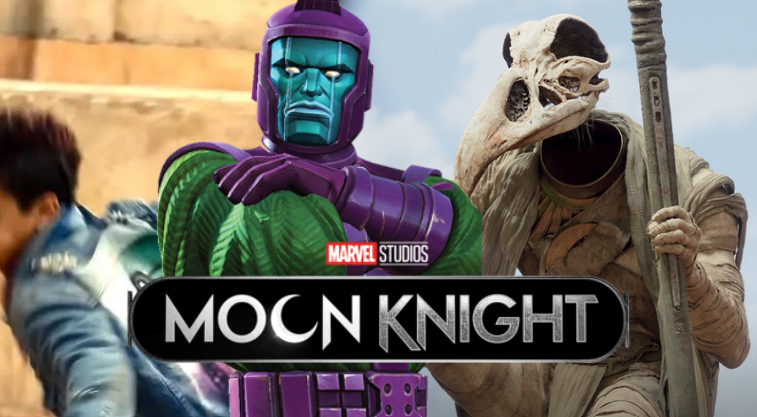 Moon Knight’s new episode featured a direct image reference to an incarnation of KANG in the comics!

Marvel Studios is now branching off into its new genres, Moon Knight will be added to its Supernatural side, while other projects like Blade are coming into this side, here is how Moon Knight is teasing the next Avengers big bad.

The next Avengers big bad was shown in Loki, well, at least his statue was shown and it was confirmed that he would appear in the finale of the Ant-Man trilogy, while fans speculate when and how he could affect the MCU and cause many deaths in the MCU, here is how Marvel is teasing us with its projects like what they did with Thanos in phase 1 & 2!

As pointed out by New Rockstars, the latest Moon Knight episode left a visual reference to Pharaoh Rama-Tut, an incarnation of Kang in the comics. The one Follower of his who was fighting Marc at the edge of a cliff could be seen wearing a jacket which had the exact same logo of the Pharaoh’s head, and it even shows his color (green and purple). This theory was then confirmed by the creators of the series to be an intentional reference to Kang.

In the future Kang time travels to ancient Egypt and becomes the Pharaoh Rama Tut. As Rama Tut he has a headpiece which is identical to the logo on the back of the jacket.

What this could mean?

This suggests that Kang had actually time traveled to the ancient part of the MCU many years ago, he even might have been watching the avengers assemble and fight Thanos, as seen in Ant-Man & The Wasp, we saw a place in the quantum realm which assembles the design of Kang’s city, could he have actually been waiting for smart & powerful beings to die before he rises up to conquer the earth?
could he have been waiting for someone to free him or is he just doing other stuff while earth just ran itself?

Marvel Studios’ Moon Knight is streaming exclusively on Disney Plus right now. Also check out: our Review for the first 4 episodes of the series.

One thought on “Moon Knight Episode 3 references Kang the Conqueror”

Next post What fans can expect from the Darkhold in the MCU?