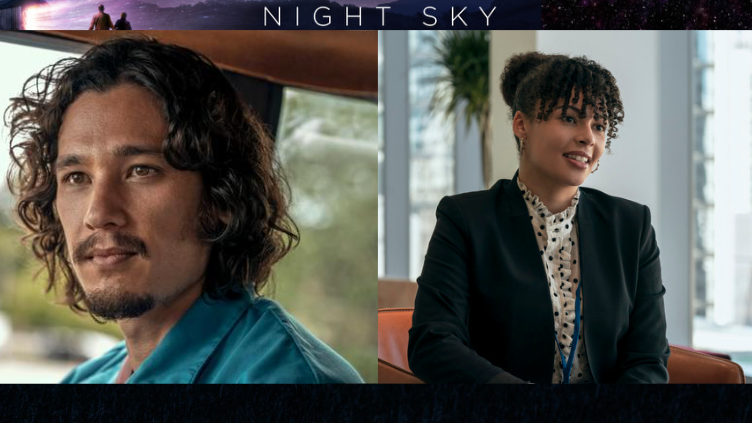 Night Sky is an upcoming series coming to Prime Video on May 20th, spanning space and time. The series follows Irene (Sissy Spacek) and Franklin York (J.K. Simmons), a couple who, years ago, discovered a chamber buried in their backyard which inexplicably leads to a strange, deserted planet. They’ve carefully guarded their secret ever since, but when an enigmatic young man (Chai Hansen) enters their lives, the Yorks’ quiet existence is quickly upended…and the mystifying chamber they thought they knew so well turns out to be much more than they could ever have imagined.

The supernatural sci-fi series is set to premiere its first episode on Prime Video May 20th and I was able to have a nice chat with stars Chai Hansen who plays Jude and Kiah McKirnan who plays Denise in the series as they spoke about their experience working on a supernatural thriller type series. Chai talked about how it differed from his past experiences in the genre and Kiah spoke on how much more difficult her role was compared to past projects.

Night Sky is a very sci-fi, supernatural and thriller type of a series, so how was it like working on a series like this?

Kiah: Well it was incredible top to bottom, some of the sets were just like out of this world and mind boggling so to be able to play the normal house but then go into a portal, How fantastic is that, it’s pretty rare.

Chai: It was fantastic, we were talking about this just before, It’s such an honor to work with such talented actors as well. Kiah is such a good scene partner. I do really appreciate the intricacies of the emotional nuances of when an actor really brings true authentic emotion to their craft and it’s just an honor to watch them work in the scene with them. So that was one of the things for me that definitely stand out.

Chai you have more experience working in shows like this which have more sci-fi and supernatural elements to them, So how was Night Sky more unique and different compared to your past experiences?

Chai: Well first of all, I’ve never done anything else other than fantasy sci-fi, it’s kind of my genre. You know, I’ve never played a human before. (laughs) You know the past shows I’ve done I have played a fish, a monkey, so this was definitely a great experience. I think just basically because just the format of the show it’s just so intricate and specific. The script was so specific that you kind of have to really pay attention to what was going on, in some of the other shows you sort of just improvise and go in tangents a bit more. But this was so specific that it was a challenge but also it was so rewarding at the end to see the final product.

Kiah previously you played Anne in ‘Mare of Eastown’ who is much more assured, while here your character is more broken and challenged so how was it playing a character like this?

It was a little bit difficult at times because you had to make decisions for a character who didn’t necessarily make decisions and it was a big deal at the point when Denise was able to kind of let go off all the stuff she was really holding on to that was holding her back, to be able to release that then have a journey after that. It was really exciting and so I look forward to what might happen with her if we’re so lucky to see her again.

It was great watching you both and Thank You for the opportunity to talk.

Thank You and nice to meet you man.

Both Chai and Kiah were very humble to talk to, and it was great fun having a chat with them.

Thank You to the folks at Prime Video for providing this opportunity!